This is Why I Write Open Source Software

Just wanted to say thanks for the ZNC Push Module you made. I’m using it with Notify My Android and it works great! This should be a standard module in ZNC imo. Stellar work my friend.

It makes me smile every time I hear from someone using my software, knowing that I can make an impact on peoples daily lives, no matter how small it may be. Thank you to everyone who has taken the time to thank me for my work.

Things that make it obvious that your “job offer” is just a piece of spam you’re throwing at the wall to see what sticks:

I just got three new toys to play with at work, sitting in a server room, just waiting for me to have fun with them. Here’s a screenshot of me running htop on the first one; it’s current hostname is “kittycat1”… 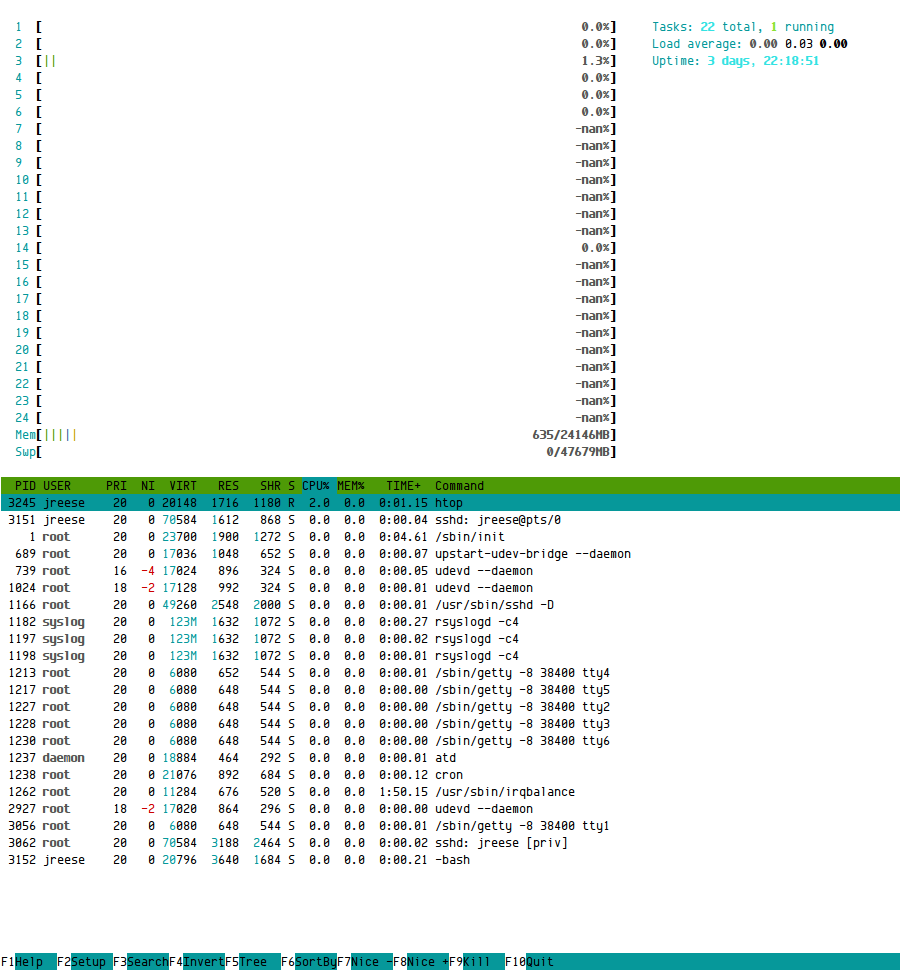 Not exactly the shabbiest set of servers to work on…

For multiple reasons, I’ve decided to move away from using my LeetCode.net domain for my online identity and begin using NoSwap.com instead. I will be slowing moving over my sites and applications, and will make sure to set up 301 permanent redirects or other forwarding methods as necessary to make sure nothing gets orphaned for the forseeable future.

As for the actual reasoning behind the move, it stems from multiple issues I had with the old domain, such as:

Anyways, in the off chance that you’re a sentient being, and actually reading this, if you happen to catch an error or gap in my redirection efforts, please drop a line to john@ this domain.

Yesterday evening, I received sorrowful news. My neighbor had passed away in her sleep, to the surprise of everyone who knew her. An active grandmother, her personality exuded a quiet energy, a presence that brightened your day and made you smile. The loss is palpable.

Rest in peace, Joyce. You will be missed.

(Originally posted by myself on Hacker News)

I’ve been typing with the Dvorak layout for about three years now. I personally can’t fully touch type, and never have been able to, although these days I’m getting pretty close if I stop thinking about it and just start typing. My typing speed has slightly increased, but is more or less limited by the speed at which I can think about what I’m trying to type. The real benefits are in the related experience.

I’ve noticed a dramatic reduction in wrist strain at the end of the day, mainly due to the shorter movements for the majority of keystrokes, as well as the proper alternation between hands. Both are hallmarks of the Dvorak layout’s primary design requirements.

Regarding impact on programming efforts, My biggest complaint is that the brackets are on the number row instead of just above the home row, but when I’m writing Python code, I use them far less, so it’s not much of an issue; when I’m writing PHP, C, or Java code though, it can get a bit annoying, but it’s a good trade-off since the +/= and -/_ keys are now closer at hand.

For my editor, I’ve been using Vim for longer than I’ve been using Dvorak, but I’ve never used the hjkl keys for normal movements; I bought keyboards that specifically have the arrow keys right under the Enter key, so moving to use those is very simple, and allows me to use Vim without having to remap any of the normal movement keys.

In all, I highly recommend the switch, especially for anyone who plans to do a lot of typing in their daily routine. The benefits have far outweighed any of the drawbacks. And purchasing a purpose-built Dvorak keyboard will be one of the best investments you can make. I personally love and highly recommend the TypeMatrix keyboards, not only for their great layout, but because it has a physical toggle switch for moving between Qwerty and Dvorak layouts, which is priceless when you want to be able to play games that aren’t friendly to non-Qwerty layouts.

If you’d like an entertaining way to learn more about the Dvorak layout, DVZine has a very informative comic book about the history and benefits.

The Good King Lisp raised his glass and toasted with the Knights of Lambda, “To much recursion!”